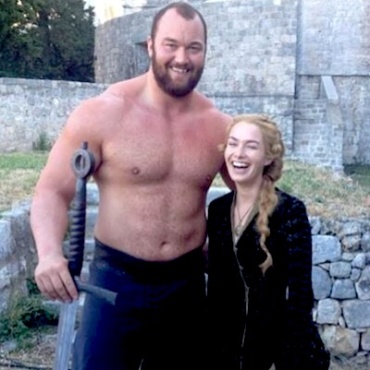 The first thing to know about the latest actor to tackle the role of Gregor Clegane a.ka. “The Mountain” on Game of Thrones, is that he’s not a trained actor at all, he’s a competitive weightlifter.

At 6’9″ and nearly 420 pounds, Hafthor Bjornsson (nicknamed “Thor” and “The Icelander”) is the third strongest man in the entire world, and the strongest in Iceland. And a role on Game of Thrones isn’t the only unique offer Bjornsson has received based on his physique.

In 2013, the Indianapolis Colts almost added him to their roster, and it’s likely that other teams expressed interest, as Bjornsson once said that he “had to choose” between his training in the gym, acting and the NFL.  END_OF_DOCUMENT_TOKEN_TO_BE_REPLACED

Here is it 40 women over the height of 5’7,” poor things were probably called hermaphrodites over the duration of their lives.