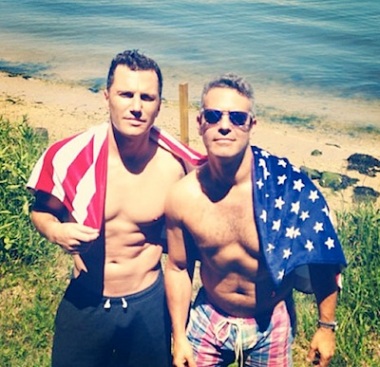 They are rumored to be secretly engaged after two-and-a-half years of dating, but Cohen insists they are strictly friends without benefits.

“Dude, Sean Avery is straight. Do you understand that? A gay guy and a straight guy should be able to be friends without you asking me if we’re engaged,” he told a paparazzi.

I think the only fucking they’re doing is with the media. In a never-ending game of hash tag, you’re it, Cohen’s response to relationship questions from fans on Twitter is “ask @imseanavery.”

I hate to sound like the “TV TV sports sports” people over at Microsoft, but the Chicago Blackhawks taking the lead tonight over the Boston Bruins and winning the Stanley Cup with two goals in the final minute and 16 seconds of the game was pretty amazing.

Sadly, I wasn’t watching because I don’t have a horse in the race and have worshipped at the altar of the Edmonton Oilers since I discovered that hockey was the best spectator sport ever. 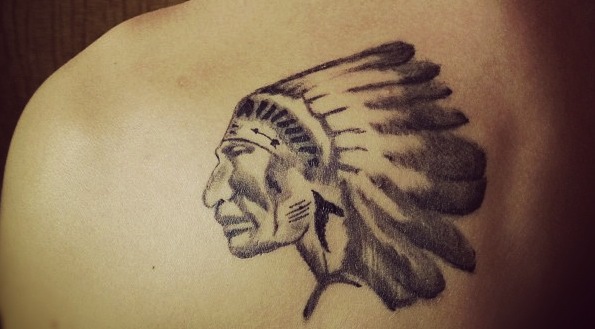 Blue Ivy Carter turns one, is bound to be role model to Kim Kardashian’s kid. (Radar)

16 reasons to think James Franco is into dudes in a non-platonic way. (ohmyGAHH!)

Or maybe he’s just working with the director of Drive on Only God Forgives. (Celebuzz)

Honey Boo Boo’s mom dyed her hair blonde and dressed up like Marilyn Monroe. (Too Fab)

Girl Next Door/House Of Wax/24 Actress Elisha Cuthbert is engaged to her 6’3″ hockey boyfriend, former Calgary Flame and current Maple Leafs defenseman Dion Phaneuf. They have been dating quietly since 2008.

Few can forget the famous interview with TSN in Calgary, where Cuthbert’s ex, fellow high-profile puck-handler Sean Avery was suspended for six games after saying:

“I love Canada. I just want to comment on how it’s become like a common thing in the NHL for guys to fall in love with my sloppy seconds. I don’t know what that’s about.” 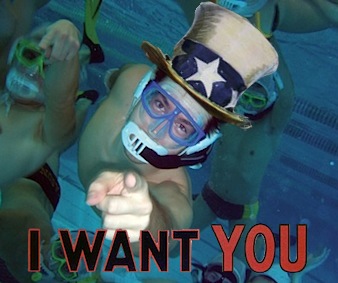 I’m a pretty big fan of hockey, which puts me in the minority as a typical American. You know what doesn’t put me in the minority? …Thinking that underwater hockey looks less appealing than an expired egg salad sandwich.

Yep, underwater hockey (UWH) is real, real interesting to watch. The extreme sport originated in England and has been “popular” here (as popular as the season one Glee kids) for the past five years. Here’s how it works:

Two teams of six snorkel, mask and fin-wearing men and women pushing a puck around the floor of the swimming pool with a miniature stick that looks like a dull carving knife.  END_OF_DOCUMENT_TOKEN_TO_BE_REPLACED 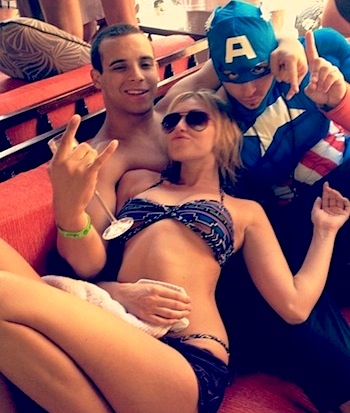 Poor Wayne Gretzky can’t catch a post-retirement break. He may be “The Great One” and the Michael Jordan of hockey but his stint as coach and part-owner of the Phoenix Coyotes didn’t exactly go as planned.

Now his party-girl daughter is causing all kinds of trouble.

There’s actually one where she’s sitting spread eagle (in a bikini) next to what looks like a shirtless beach bum  and a female version of Skrillex.

END_OF_DOCUMENT_TOKEN_TO_BE_REPLACED

Fear not, hockey fans and attendees of the 2012 Tim Horton’s NHL All-Star Game, bratty Alex Ovechkin may be absent because his “heart is not there” due to his suspension but Drake will be with his adorable hair and smile. (If only he’d refrain from singing)

Drake, Javier Colon (winner of The Voice) and about 50 notable hockey players all in one room. If you happen to have tickets to the thing, which takes place in Ottawa you’re a lucky kid.

I have to chuckle a little at the ignorance of Popdust’s headline “Drake To Get In Touch With His Roots At NHL All-Star Game.” Cause all Canadians like hockey?

The amount of Americans that like football is equal to the number of Canadians that like hockey.  END_OF_DOCUMENT_TOKEN_TO_BE_REPLACED