I’ve loved Justin Timberlake ever since I found out there was an alternative to the Backstreet Boys. I put up with his cornrows, cross tattoo, and matching denim cowboy hat and jacket because I knew he would always bring me joy with his luscious musical talents and kind blue eyes, but now I see that his recent marriage to Jessica Biel has rusted his gift, and something must be done!

Though I’m positive that the new song, “Suit & Tie” featuring Jay-Z, is a rushed, throwaway b-side track to appease the fans and by no means a gauge of what the album he’s working on (The 20/20 Experience) will be like, I also know as a longtime Timberlake fan that it’s the fault of his current girlfriend, or in this case, wife.

END_OF_DOCUMENT_TOKEN_TO_BE_REPLACED 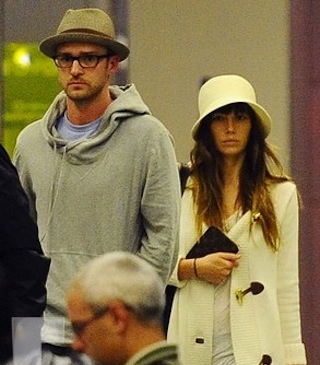 Justin Timberlake and Jessica Biel were spotted at an Italian airport following their diarrhea goat cheese wedding in Fasano, and it looks like the magic is already gone.

They either saw a ghost, still aren’t used to being photographed or have turned into official married drones. It’s evident in their blank Children of the Corn stares.

Still, we can also never rule out the possibility that they were converted by Scientologists at the arrival gate OR that they were getting into character for a nightly viewing of The Walking Dead.

“It’s great to be married, the ceremony was beautiful and it was so special to be surrounded by our family and friends,” J and J said in a statement released Friday.  END_OF_DOCUMENT_TOKEN_TO_BE_REPLACED

Justin Timberlake may not be the most descriptive guy on the planet. This became especially apparent when he told the story of wooing Jessica Biel to a room full of reporters. It also became apparent that he is more whipped than Katy Perry’s bra attachments in “California Gurls.”

“We have a couple of rules in our relationship,” he said at the Hollywood Foreign Press conference. “The first rule is that I make her feel like she’s getting everything. The second rule is that I actually do let her have her way in everything. And, so far, it’s working.”

There’s Jessica’s face (from Hitchcock), upon hearing that Justin thinks she’s so special and hot.

END_OF_DOCUMENT_TOKEN_TO_BE_REPLACED

I’m pretentious (or maybe just stoopid) to write “geology” instead of “rock” or engagement ring. I only wanted to talk about how Jessica Biel’s ring from Justin Timberlake looks like costume jewelry.

OR a ringwatch? Or Green Lantern’s source of power. In case you forgot, JT and JB began dating in January 2007, broke up in March 2011 then got back together just four months later, in July.

“It’s funny – I didn’t try on that many dresses. They had them all lined up and I was working all week and my 2-year-old walked in, walked up this dress and said, ‘Mama, wear this!’