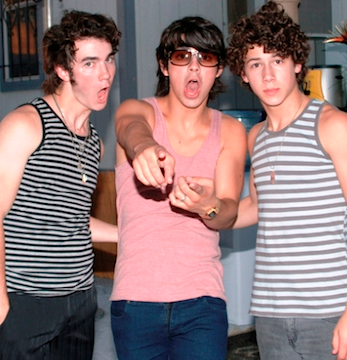 I’m sure that news of a Jonas Brothers reality show peaks your interests to the max. I’m not interested in giving my five readers a heart attack, so proceed with caution.

Headlines read “Move Over Kardashians” after word of a Jonas show on the E! Network hit the web. Sources call the Disney prince’s show a “family” effort that is set in New York.

Nick Jonas (the one with diabetes) will probably be followed around as he performs on Broadway in How To Succeed in Business Without Really Trying.

Kevin (the elder one who ironically looks the most like a baby with sideburns) will likely be filmed with his wife, Danielle Deleasa.  END_OF_DOCUMENT_TOKEN_TO_BE_REPLACED