Everyone knows Ms. Bama and her husband are super active and into basketball, football, hell, all the ball sports, and during a visit with LeBron James, Dwayne Wade, Ray Allen, coach Erik Spoelstra, 50-year-old Michelle Obama showed impressive jumping and dunking skills in the background of an otherwise boring talk between Wade, Allen and the coach. The toothy faces her and LeBron make after the dunk might have you wishing for a buddy comedy starring the two of them as boisterous siblings or longtime besties coping with adulthood.

Gahhh. Michelle Obama is so fucking adorable. If she wasn’t so obsessed with abolishing fast food / shoving apple slices in everyone’s mouths I would want her to adopt me.

LeBron James is having a great week. A few days after posting a picture of his 28-year-old abs murdering the weight room, Kobe Bryant murdered his 34-year-old Achilles’ heel along with his career.

Arch rival and five-time NBA championship winner Bryant wrote that he was “Lookin like Mrs Doubtfire with a jerri curl cap” right before entering surgery.

Mrs. Doubtfire in a shower cap or LeBron in the gym? Tough choice. 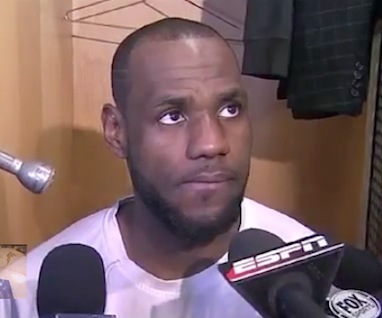 Egomaniac baby LeBron James is having a hard week. On Wednesday, the Chicago Bulls put an end to the Miami Heat’s lengthy streak – one rivaled only by Wilt Chamberlain’s ’71-’72 Lakers. To add insult to injury, James narrowly avoided having the headband snatched directly off his dome by an eager fan. The disappointed king vented his frustrations in a post-game interview, calling the streak “one of the best this league has ever seen.”

In the locker room, the LeBron I remember from the infamous 2010 press conference appeared, saying things like “Let me calculate my thoughts real fast” and “I don’t know if I like that question.”

END_OF_DOCUMENT_TOKEN_TO_BE_REPLACED 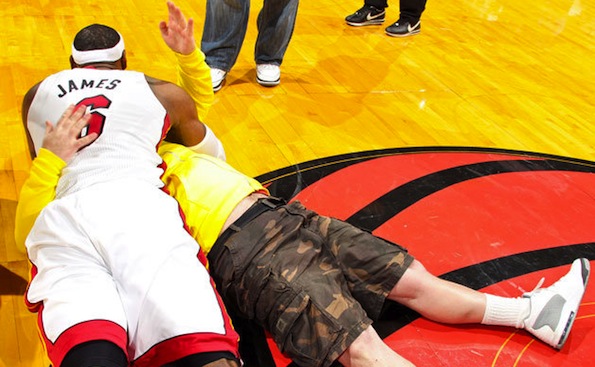 Beyonce scats at the inauguration in the latest Bad Lip Reading video. (ONTD!)

The cutest thing you’ll ever see besides kittens on YouTube has to be pictures of Michelle Obama hugging the men’s basketball team at the 2012 Olympics. If we’re judging Michelle’s favoritism based on how big she smiled for each player – LeBron James wins.

She looked the least happy to be embracing the Knicks’ Tyson Chandler but the boredom left her face when Kobe and LeBron approached her on Sunday after beating France in the preliminaries.

END_OF_DOCUMENT_TOKEN_TO_BE_REPLACED

August 15th, a new track from Game (formerly The Game) was leaked onto YouTube. The song, “Martians Vs. Goblins,” from his upcoming R.E.D Album has guest vocals from Lil’ Wayne and Tyler, The Creator.

The song disses several major names in the business including Rihanna (something about snatching her up and throwing her “in front of a fuckin’ train?”)

And Bruno Mars, dissed by Tyler, The Creator for “Sucking dick and fucking male butts in the same closet where Tyler Perry gets his clothes from.”

And Miami Heat star LeBron James, dissed by Tyler, “Fall back like Lebron’s hairline against the Mavericks” and Game, who mentions boning Lebron’s mother while Delonte West (former LeBron/Cavaliers teammate) videotapes it?