A photo of Emma Watson in character for The Bling Ring surfaced nearly a year ago. In a new teaser for the movie about the infamous group of Cali teens who almost got away with ripping off celebs like Paris Hilton, Rachel Bilson and Lindsay Lohan, Watson parties, drinks and makes provocative faces.

This is still worlds apart from, say, the bikini string-thing plot of Spring Breakers, where Disney stars like Vanessa Hudgens prance around naked for unproven director Harmony Korine.  END_OF_DOCUMENT_TOKEN_TO_BE_REPLACED 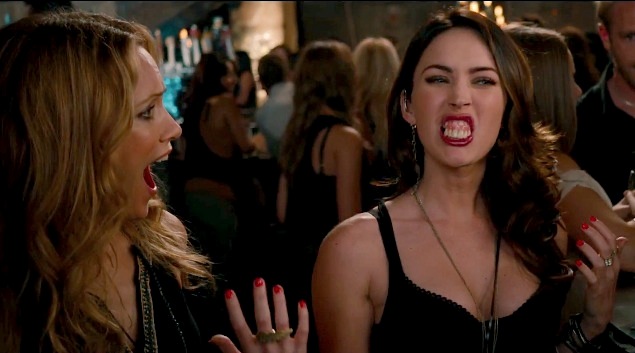 Leslie Mann felt protective of Megan Fox and her boobs in This is 40. (Yahoo!/Deadspin)

Judd Apatow’s wife, and a female comedic actress in her own right, Leslie Mann was at the L.A. premiere for her movie The Change Up and started talking about Judd’s new project, the confirmed Knocked Up spinoff.

A spinoff which co-stars none other than my favorite quirky, mentally-unfit-to-raise-a-goldfish, hot ghost lady, Megan Fox. Here is the exact mumble-tastic quote from Leslie:

“Megan Fox is so funny yeah she’s hilarious, I, you know, you wouldn’t, I mean I dunno if other people, I dunno, I think she’s really funny.  You’ll be pleasantly surprised.”

Okay, I’M not surprised. I dunno if anyone else saw her on Saturday Night Live, Jennifer’s Body (everybody misunderstood that movie) or the indie comedy How To Lose Friends And Alienate People, but this is the only kind of “acting” Mrs. David Silver or as I like to call him Brian Austin G (emphasis on “G,” it’s an ironic gangster name) should be doing.