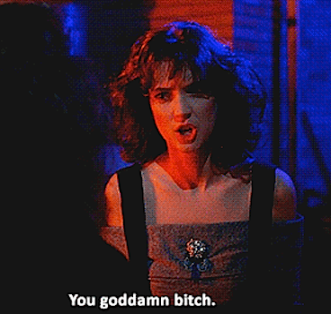 Winona Ryder isn’t that girl in class that raises her hand first. As far as celebrities go, she’s highly private and reclusive, especially in the years following Girl, Interrupted (1999) and her shoplifting trial (2002).

Thankfully, the beloved icon who debuted in 1986’s Lucas opposite Corey Haim and Charlie Sheen, later blazing brooding witty trails with Beetlejuice, Mermaids and Reality Bites, has recently put herself in the public eye just a tiny bit more than we’re used to.

In a brief Q&A with Parade, Ryder admitted to watching and reciting dialogue from her old movies when they’re on TV.

“Well, yeah! Now they’re considered golden oldies, which is awesome,” says Ryder, 41, whose latest film is The Iceman (in theaters May 3). “I was watching Little Women recently, and I didn’t want to get up for fear of missing something. And Heathers is like my own Rocky Horror Picture Show; I recite the lines when it’s on. It may seem odd, but I think it’s because they’re really good movies.”  END_OF_DOCUMENT_TOKEN_TO_BE_REPLACED