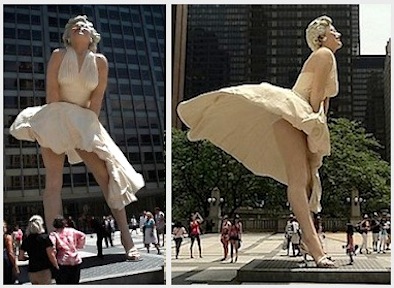 A 26-foot tall statue of Marilyn Monroe frozen in time doing her famous I-managed-to-make-a-subway-grate-sexy pose will be moved from Chicago and sent to Palm Springs, California next month.

“Forever Marilyn” may be as popular to tourists as Kennedy’s mistress herself but it was ranked number one in a list of bad public art with fiberglass cows and a tasteless statue of Bewitched star Elizabeth Montgomery in Salem trailing just behind. Some women even crinkled their nose and called the statue sexist while visitors shamelessly snap pictures from under her dress.  END_OF_DOCUMENT_TOKEN_TO_BE_REPLACED 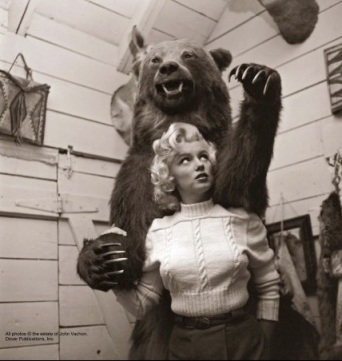 Dang, that Michelle Williams movie (My Week With Marilyn) isn’t the only thing helping out the Monroe-o-philes these days.

After a few previously unseen 1940s photos were auctioned off in Beverly Hills we are now able to view MORE rare Marilyn Monroe images.

This time they come in the form of River Of No Return set photos taken in 1953 by by John Vachon. They appear in the book Marilyn, August 1953, The Lost Look Photos by Vachon and Brian Wallis…

The shots were taken in the Canadian Rockies in beautiful Alberta’s Banff National Park, making them extra magical.  END_OF_DOCUMENT_TOKEN_TO_BE_REPLACED