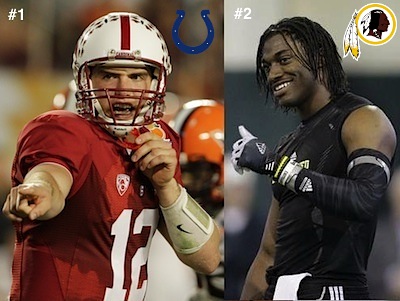 In case you didn’t know, there’s a 99.9% chance that Stanford’s Andrew Luck is going to the Colts as the number one pick, to fill the void left by current Bronco Peyton Manning.

The number two pick, QB Robert Griffin III of the Baylor Bears, will go to the Washington Redskins. NFL Network analysts seem to agree that offensive tackle Matt Kalil will head to Minnesota. As for the rest of the draft, here’s a mock-up prediction of picks.  END_OF_DOCUMENT_TOKEN_TO_BE_REPLACED

B.o.B’s new song “Strange Clouds” featuring Lil’ Wayne surpassed Maroon 5’s “Moves Like Jagger,” which spent weeks at the top spot, and Adele’s “Someone Like You” whose video was just released, on the iTunes top songs chart yesterday.

B.o.B aka Bobby Ray Simmons, 22, is of course famous for his songs “Nothin’ On You” featuring Bruno Mars and “Airplanes” featuring Haley Williams, two of the absolute biggest hits of 2010.

His sophomore album will also be titled “Strange Clouds” and the rapper promises to release another new song after he reaches 400,000 followers on Twitter. (He’s currently shy of 300,000, at 279,589)…

END_OF_DOCUMENT_TOKEN_TO_BE_REPLACED

The Help has quickly become the little engine that could of drama films. It is practically unheard of for this type of movie to even reach number one at the box office let alone twice in a row. (It was number two in it’s first weekend)

The Help is a racial-charged look at African-American maids in the South’s Jackson, Mississippi in the early 60’s from the point of view of a disheartened outcast of a writer, played by Emma Stone.

Originally released as a controversial book by Kathryn Stockett in 2009, it wasn’t long before it was written for the screen and turned into its own controversial movie starring Viola Davis, Jessica Chastain, Allison Janney and a treacherous Bryce Dallas Howard.