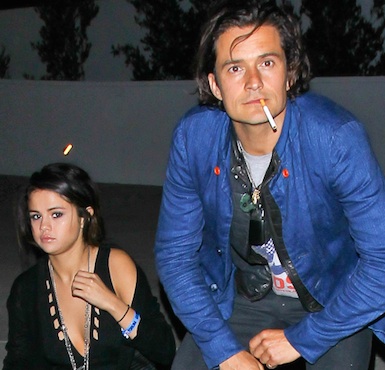 Selena Gomez and Orlando Bloom are quite possibly exchanging bodily fluids, and the proof is in this photo. Reportedly of the pair leaving one of Chelsea Handler’s stand-up shows and judging facial expressions only, the photo clearly depicts two very specific types of guilt.

Nearly 40-year-old Orlando is guilty of hooking up with someone who is 21 but looks 12, and Selena just found out the hard way that British men aren’t circumcised.

In that jacket, with those eyes he also kind of looks like a rapey magician. Correction: rapey uncircumcised magician.

TMZ thinks they’re revenge f*cking to get back at Miranda Kerr and Justin Bieber for leaning against each other for 5 seconds as a fashion show four years ago. Not far-fetched at all. 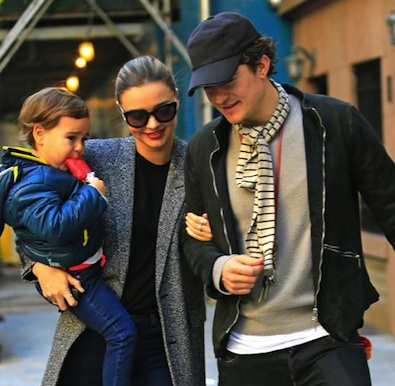 Promising news for those of you wondering if you can ever actually stay friends with your ex: super mature and beautiful former couple Miranda Kerr and Orlando Bloom were seen strolling around the chilly streets of New York laughing arm-in-arm with their two-year-old son in tow just days after the world wept over their split.

The Aussie model whose boobs famously lagged out of her shirt earlier this year and British star of nothing recent confirmed the amicable separation on Thursday.

“Despite this being the end of their marriage, they love, support and respect each other as both parents of their son and as family,” a joint statement released to E! by Bloom’s rep read.  END_OF_DOCUMENT_TOKEN_TO_BE_REPLACED

In the new trailer for the second Hobbit movie, The Desolation of Smaug, we get a few glimpses of Orlando Bloom: House of Wax edition, plus a totally LOST Evangeline Lilly and Lee Pace as Thranduil.

No sign of Smaug with the pleasant voice of Benedict Cumberbatch yet, but we all know Peter Jackson will turn him into Bowser. Like Gollum, Smaug is kind of a likable villain, but not cartoonishly likeable. (If An Unexpected Journey taught me anything, it’s that we can’t pray that crap away.)

HURRY LEGOLAS! KILL THE EYBROWS AND THEN KILL YOURSELF!  END_OF_DOCUMENT_TOKEN_TO_BE_REPLACED