James Cameron revealed his plans for the Avatar sequels at a Titanic press event saying that although he hasn’t put pen to paper, he does have “an idea” for the fourth.

“Basically it goes back to the early expeditions of Pandora, and kind of what went wrong with the humans and the Na’vi and what that was like to be an explorer and living in that world.”

So Avatar 4 is a prequel, what about two and three?

Cameron says the next two films will probably complete the “thematic arc,” thus leading them to go back to see “what it was like on those first expeditions” in 4. #Vague 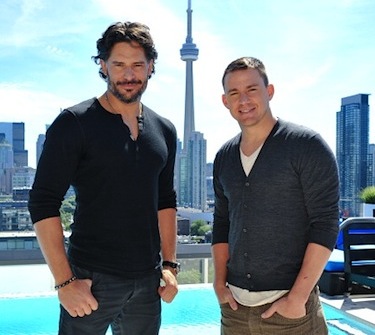 While I find the idea of an origin story for people with names like “Big Dick Richie” unnecessary, I’m sure the millions of women who saw Magic Mike will disagree. Turns out, there probably is going to be a second movie for those of you who were left “wanting more.” Channing Tatum told UK Glamour, “We’re working on the concept now, we want to flip the script and make it bigger.”

Here’s the part where I say, wait? Magic Mike had a script? But I didn’t see it and I figure there’s a story in there somewhere. In June, Joe Manganiello told Hollywood.com, “We’re actually talking about the possibility of doing the prequel. Because if you do the sequel, then you lose Mike.” END_OF_DOCUMENT_TOKEN_TO_BE_REPLACED

Here we see Franco playing Oz, the con artist who, much like Dorothy, is whisked out of his good ol’ boy American hometown into a mysterious land full of magic, emeralds and witches.  END_OF_DOCUMENT_TOKEN_TO_BE_REPLACED