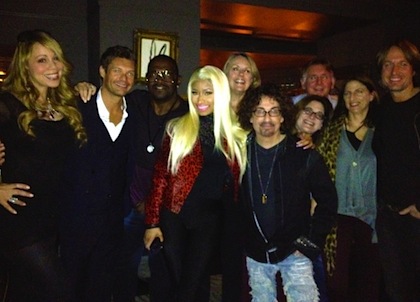 American Idol producers have sealed the deal with Nicki Minaj and Keith Urban, who will join Mariah Carey and Randy Jackson (who was rumored to not be returning) as judges.

The people behind this are EXTREMELY excited. Possibly more excited than longtime viewers.

Mike Darnell called the grouping “one of the most exciting judging panels around,” while Simon Fuller used the word “dynamic” to describe season 12.  END_OF_DOCUMENT_TOKEN_TO_BE_REPLACED

Randy Jackson is stepping away from his judging position on American Idol after 11 seasons.

TMZ has learned that Jackson will stay on as a “mentor” in the 12th season when judges Mariah Carey and Nicki Minaj debut.

No word on who Randy’s replacement will be.

We do know that it ISN’T Kanye or Diddy, and that Enrique Inglesias and Keith Urban are in talks to fill the spot.

“There will be several positive announcements to follow shortly, American Idol is moving up a gear and with the help and commitment from Fox, who are more intimately involved and supportive this season than ever before, we are looking forward to a dynamic new season ahead.”   END_OF_DOCUMENT_TOKEN_TO_BE_REPLACED