Browns quarterback Johnny “Football” Manziel allegedly sent Dr. Drew On Call co-host Samantha Schacher a photo of his penis in a hotdog bun and a video of him dancing naked to “It’s a Small World,” in a $25 million dollar lawsuit filed in Florida.

The 1st round draft pick’s agent is calling the suit “1000000% fake,” and it’s more than likely that serial legal attention-seeker Jonathan Lee Riches is behind the whole thing. (Schacher denies ever filing it.)

Riches is the man who accused Kim and Kanye of being terrorists and Britney Spears of forcing him to buy implants and cocaine for her at gunpoint.

Read: The 18 Most Outrageous Things Johnny Football Has Done

I know I’ll come off as a total asshat saying this, but I’m not so shabby at predicting fame. Like Lana Del Rey long before SNL, Emma Stone in Superbad, Cee Lo’s “F*ck You,” Ellie Goulding, Adele…

If I was fond of leaving the house I would pursue a career as a talent scout. (But I’d probably end up handing out flyers at the mall, luring raccoon-eyed saps to my fraudulent modeling agency.)

Speaking of modeling and people who should be famous, Nina Nesbitt is really great. She’s a legitimate songwriter from Scotland who had a pretty big hit in the UK called “Stay Out.”  END_OF_DOCUMENT_TOKEN_TO_BE_REPLACED 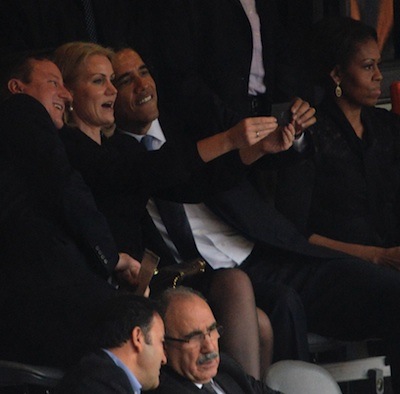 Even though people have been twerking and taking selfies since before the invention MTV and polaroid cameras, 2013 was the year we gave these occurrences a title that even your most out-of-touch relative might causally drop into a sentence.

Just the other day Obama was called out for taking a “selfie,” (a “self-portrait photograph, typically taken with a hand-held digital camera or camera phone” according to Wiki), at a funeral.

Not just a funeral, but the funeral of Africa’s most beloved icon of peace, equality and freedom: Nelson Mandela.

The Obamas are as American as a family can get, one that often partakes in selfie-taking. For instance, here is one of Michelle with her and Barack’s Portuguese Water Dog Bo…  END_OF_DOCUMENT_TOKEN_TO_BE_REPLACED