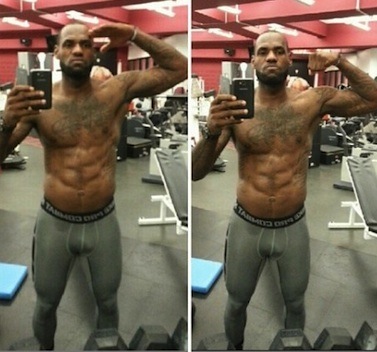 LeBron James is having a great week. A few days after posting a picture of his 28-year-old abs murdering the weight room, Kobe Bryant murdered his 34-year-old Achilles’ heel along with his career.

Arch rival and five-time NBA championship winner Bryant wrote that he was “Lookin like Mrs Doubtfire with a jerri curl cap” right before entering surgery.

Mrs. Doubtfire in a shower cap or LeBron in the gym? Tough choice.

On top of being compared to Sarah Palin due to his age (he’s 42) and good looks, the internet wants to see Mitt Romney’s running mate shirtless.

In fact, if you Google “Paul Ryan shirtless” images of Glee’s Matthew Morrison topless on the cover of Details Magazine come up, along with a bunch of other half-naked celebrities and sports figures.

We want a map of the abs, not his budget-cutting “Roadmap for America’s Future.”

TMZ even wrote that a source told them that he’s “totally ripped and has a six pack” and was featured on a list of the 50 Most Beautiful People on Capital Hill, 2008.  END_OF_DOCUMENT_TOKEN_TO_BE_REPLACED