Glover displays excellent pantomiming skills in hopes of impressing a girl (Amber Lauren Jones) at a diner. Dude has doves flying out of his shirt and she barely bats an eye. Cold.

As you can imagine, Glover, Murai and Jones had a blast making this.  END_OF_DOCUMENT_TOKEN_TO_BE_REPLACED 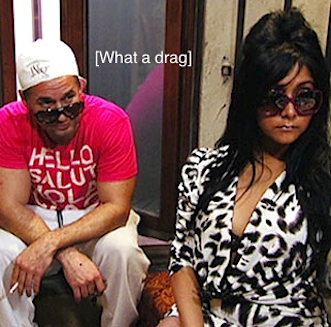 Jersey Shore fans, get ready for some news to quake your kooka. All you spray-tan loving, stupidity voyeurism-addiction-having motherfuckers better prepare for some new cast members as the show ‘transitions into a new generation.’

According to TMZ, MTV network executives are searching for fresh talent to incorporate into seasons six and seven. The production company behind the runaway exploitative hit, 495, look to limit The Situation and Snooki’s roles in light of their recent life changes.

Mike Sorrentino will likely be sober or at least keeping a TV facade of sobriety while Snooki prepares to pour White Russians directly into her baby’s mouth. (Speculation)