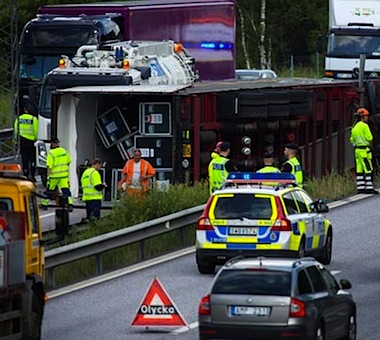 A truck carrying equipment for Madonna‘s MDNA tour pulled a Super Bowl XLVI when it overturned in Sweden on its way to Ullevi Stadium for a concert that should take place later today.

No one was killed but a few cars were damaged, one person was injured, and traffic was blocked. Or, as Madonna would have said if she were there, “WHY AREN’T YOU LOOKING AT ME?!”

I like to imagine that some nice Swedish woman was walking around sightseeing and was suddenly hit in the pointy pale face by a metal wedding dress or a bag of white top hats but pictures seem to indicate that it was just a bunch of boring speakers.  END_OF_DOCUMENT_TOKEN_TO_BE_REPLACED