In Jobs, in theaters August 16, 2013, we see Ashton Kutcher transformed as Steve Jobs in the early days, before the success of Apple Inc. and invention of the iPod, iPhone and iPad and his struggle with cancer.

As the movie progresses, he looks and sounds exactly like Ashton Kutcher with glasses on.

Apple may be planning to release an iPad mini, for when your flow is extra light.

But seriously, according to reports from several Asian countries, Apple has ordered a significant amount of 7.86 inch Samsung screens, two-thirds the size of the iPad we know and love.

The smaller item would likely be successful competition against the Kindle Fire in all it’s book-reading, movie-watching glory, with a price more in the $300 dollar range, rather than $560. In late 2010 Steve Jobs shot down the idea of a device larger than an iPod Touch and smaller than an iPad, saying that apps could be greatly limited by a screen that size:  END_OF_DOCUMENT_TOKEN_TO_BE_REPLACED 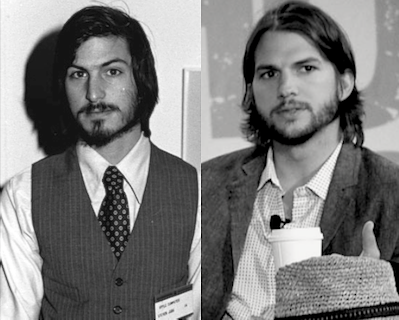 I’ve seen Ashton Kutcher in exactly one movie where his acting could be considered above-average and dramatic and it wasn’t The Butterfly Effect, it was the 2009 drama Personal Effects. Obviously, I have mixed feelings about Kutcher starring in Jobs.

It seems like Tom Cruise would have been a better choice but perhaps that’s where Sony will take their separate version of the mogul’s life, based on the biography. Kutcher, a former biochemical engineering student UI, can be credited for the success of Twitter and has invested money in Skype and Foursquare. END_OF_DOCUMENT_TOKEN_TO_BE_REPLACED

According to his iPod selection (it was dissected in his new biography, by Walter Isaacson) and several quotes, Steve Jobs was not that interested in today’s musical stylings. He much preferred 60’s and 70’s music.

Bob Dylan was by far his favorite musician (his iPod contained 21 Dylan albums) who he also looked up to, someone he may have learned “constant innovation” from.

So if innovation is what kept Apple alive through the years, can we attribute the company’s success to Bob Dylan? No, not completely. But it’s still intriguing.

END_OF_DOCUMENT_TOKEN_TO_BE_REPLACED

There is hardly a person alive who hasn’t owned an iPod or used a Macintosh computer. Even your grandma has walked past a Mac Store or seen a movie with some celebrity doing important research, intently staring at a screen that slyly depicted some adorable colored fruit icon.

You’d see U2 and other prominent musicians famously dancing through an iTunes commercial.

That upside down glowing white logo, shown on several season of Sex And The City, was Carrie Bradshaw’s sole means of writing her famous sex and advice column.

The villainous characters on early season of Fox’s hit show 24 would use Windows computers, while the “good guys” used Macs. Attractive women in nearly every horror movie I can imagine put in iPod earbuds and start running down the street right before a big kill scene…