Please let it be true! Adorable British songstress Ellie Goulding might just be a judge on X Factor alongside Simon Cowell (returning to the original British version for the first time in three years) and Cheryl Cole (also after a lengthy absence).

Longtime third judge Louis Walsh told The Sun that he’s “heard” that Goulding is a contender, though other Sun sources remind us that Walsh is not at all involved in who ultimately snags the gig.

Goulding, who has been busy touring for Halcyon and its expansion, Halcyon Days, has become the go-to girl for recording new songs for big budget, teen box office favorites like Twilight (“Bittersweet”), The Hunger Games (“Mirror”), AND Divergent (“Beating Heart”).

END_OF_DOCUMENT_TOKEN_TO_BE_REPLACED

Today it was announced that Britney Spears removed herself from The X Factor before Simon Cowell canned her and her cans for delivering the wrong kind of crazy.

As much as I love her I don’t think I’ll miss the polite clapping and three or four-word comments like “I really enjoyed it” or “You’re a diva!” (in a positive context).

Come on. This is no surprise. We knew from the get-go that this was a one time thing. Britney was paid $15 million to make faces and walk out and wave with Demi in the beginning of the show for a few months…

She probably wants to come back about as much as Simon wants her to, which is not at all. It’s time for her to work on her music, and sit at home ordering Fox Racing gear for her sons. END_OF_DOCUMENT_TOKEN_TO_BE_REPLACED

On part one of The X Factor finale last night, the remaining three contestants were joined by their sort-of idols.

Tate Stevens and his dimples got Little Big Town, Simon’s group, Fifth Harmony, were paired with readily available Demi Lovato for “Give Your Heart A Break,” and little Carly Rose Sonenclar was gifted the bag of crazy known as LeAnn Rimes.

About a minute into “How Do I Live,” Carly announced “Ladies and gentleman please welcome the amazing LeAnn Rimes,” which shocked me, mostly because I forgot the song wasn’t by Faith Hill.  END_OF_DOCUMENT_TOKEN_TO_BE_REPLACED

Three-surfers-with-three-brain-cells Emblem3 were finally sent home after hanging Beatles’ favorite “Hey Jude” from the rafters and beating it with a bag full of antique railroad spikes.

Fifth Harmony, who have slowly been gaining momentum since their cover of Kelly Clarkson’s “Stronger,” sealed the deal on Wednesday with a show-stopping rendition of “Anything Could Happen” by Ellie Goulding. Stevens sang about falling into a bonfire that reminded him of his wife and Carly Rose did Elton John’s “Your Song” and “Imagine” by John Lennon.  END_OF_DOCUMENT_TOKEN_TO_BE_REPLACED

As a viewer of both The Voice and X Factor, I can effectively say that it’s easy to find flaws in the format, especially when the contestants can’t sing.

The judges on The Voice would NEVER turn their chairs for these no-talent, Good Charlotte-sounding douche factories.

I would say that “America” is voting based on looks alone if all four judges didn’t shower them with praise every week after each grade school talent show-worthy cover from brothers Wesley Stromberg, Keaton Stromberg and Drew Chadwick. Apparently I’m just clueless.  END_OF_DOCUMENT_TOKEN_TO_BE_REPLACED 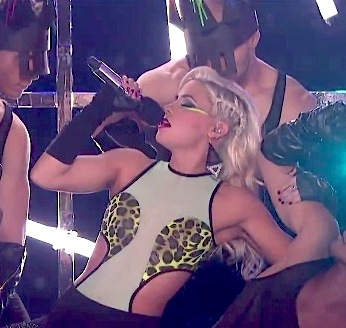 There’s no other description besides: DUBSTEP. Yep, Dubstep Patti. Demi Lovato decided to transform her team for the live shows turning brown-haired, leopard spot appliqué-loving CeCe into a blonde “if Ke$ha was hot” bombshell.

“If CeCe doesn’t become likeable she’s not going to have a future as a pop star,” Sherlock Lovato told the cameras in a fascinating behind-the-scenes look at brainlessness.  END_OF_DOCUMENT_TOKEN_TO_BE_REPLACED

Britney just can’t escape her past. Like fatty skin rising from chicken broth, new allegations from her 2008 melt down surfaces.

In new court reports, the X Factor judge’s former manager and ingrown pubic hair Sam Lufti claims he tried to rescue the pop star from drugs, saying she was addicted to crystal meth and took 30 prescription pills when she was put on an involuntary psychiatric hold.

These allegations hit the tabloids this week because Lufti is suing Britney Spears and her family for defamation and breach of contract.

Britney’s mom wrote a book Through the Storm: A Real Story of Fame and Family in a Tabloid World, where she “lied” and said Lufti was drugging and isolating Britney.  END_OF_DOCUMENT_TOKEN_TO_BE_REPLACED 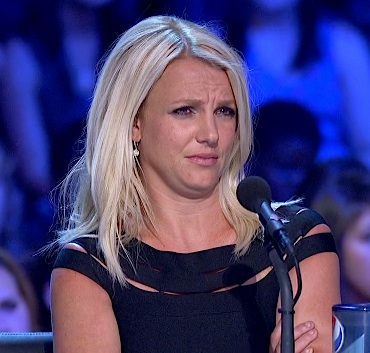 Everyone must have noticed the look of fear and distaste Britney Spears permanently has plastered on her face during her judging stint on season two of The X Factor.

After five episodes of close examination, I’ve determined that the faces mean nothing, it’s just her way of coping with being on TV.

Granted, when children or teenagers announce themselves onstage, she lights up like a well-carved jack-o’-lantern.

Most of the time she just looks like she smelled some really rancid garbage. So I ask you, who the hell placed the trash can full of year-old yogurt, eggs, milk and steak next to Britney?  END_OF_DOCUMENT_TOKEN_TO_BE_REPLACED

The second episode of NBC’s The Voice aired on Wednesday at the same time as Fox’s U.S. The X Factor season two. Christina and Britney pitted against each other in a Mickey Mouse Club judge-off…

While Britney entertained me more than Christina, I will still vouch for The Voice over X Factor, Idol, and America’s Got Talent. Here’s why:  END_OF_DOCUMENT_TOKEN_TO_BE_REPLACED