Blue Ivy Carter turns one, is bound to be role model to Kim Kardashian’s kid. (Radar)

16 reasons to think James Franco is into dudes in a non-platonic way. (ohmyGAHH!)

Or maybe he’s just working with the director of Drive on Only God Forgives. (Celebuzz)

Honey Boo Boo’s mom dyed her hair blonde and dressed up like Marilyn Monroe. (Too Fab)

The new Best Coast single “Our Deal” is getting a little help from celebrity notoriety, the LA-based 60’s girl-group inspired outfit enlisted Drew Barrymore to direct “Our Deal.”

The video features Let Me In‘s Chloë Moretz and cameos from Miranda Cosgrove, of cheesy pop fame and Alia Shawkat, who starred in Whip It with Barrymore.

Veronica aka Moretz’s love interest is played by Tyler Poser, star of MTV’s Teen Wolf, as a member of the “Day Trotter” gang and not the wolf-inspired “Night Creeper” gang. Wow he’s really branching out as an actor. Cough cough.

The video combines any and all gang movies of the past, such as the 1979 cult classic The Warriors and also West Side Story. Except with neon high-tops, hair extensions, Urban Outfitters threads and puka necklaces, instead of spikes, tight white shirts and leather vests.

Oh and it’s a girl in a leather jacket and a GUY in a tanktop. See how the roles have reversed since the 60’s and 70’s? Clothing exchange. Voila. 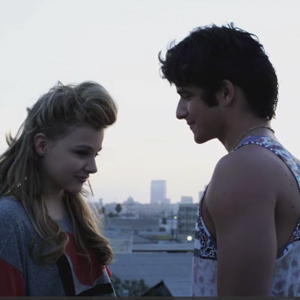