As anyone with a TV, Facebook or even the most snail-paced internet connection knows – The Walking Dead season 4 finale was on last night.

Considering how uneventful and equally or less exciting than every other non-finale episode, I’m baffled by the amount of websites that called it “shocking,” “exciting” and “brutal.” (Spoilers ahead.)

The real shocker was that nobody died. Not Glenn (dead in the comic) or Maggie (what I expected) or even the new characters, and that the craziest events of the season didn’t occur when the gang ended up trapped in a train car together, but two episodes ago, when crazy-eyed Lizzie exclaimed “Don’t worry, she’ll come back. I didn’t hurt her brain,” after murdering her younger sister.  END_OF_DOCUMENT_TOKEN_TO_BE_REPLACED

Gwyneth Paltrow turned into Jan Brady for the cover of her new cookbook. (Evil Beet)

I really don’t want to make fun of Miley Cyrus anymore, but she’s making it SO difficult. (E! Online)

Michael Phelps tried to crowd surf in an inflatable raft, fell on his ass. (Deadspin)

Zooey Deschanel belts out the National Anthem at game three of the World Series. (Evil Beet) 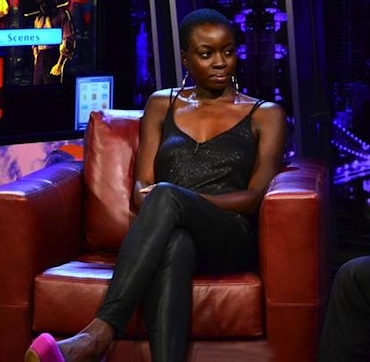 Danai Gurira, who plays Michonne on The Walking Dead (which returns on Sunday, October 14), talked about Michelle Obama and why you shouldn’t be afraid of zombies on Attack of the Show’s Tuesday episode.

“You can call Michonne a badass, I just play one on TV,” she told AOTS host of the week Rob Huebel.

On sword training: “It was intense like right after I got the job it was straight into training with it, you know new muscles you don’t realize you have are now screaming and resenting you.”

END_OF_DOCUMENT_TOKEN_TO_BE_REPLACED

In “Zombie Experiment NYC” AMC’s The Walking Dead  unleashes people in convincing zombie makeup upon New York in response to being dropped from Dish Network.

The Walking Dead returns October 14, and this time Rick and the gang are on the move. Actually on the move, not like last season where they said they were going to be but really they spent the whole time looking for that little girl on a boring farm owned by an eerie old control freak.

There are new character (zombie-beastmaster “Michonne” introduced at the end of last season, and the villainous “Governor”), and the reintroduction of Daryl’s presumed-dead brother, Merle Dixon.