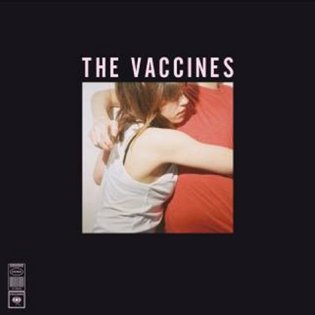 Brand new onto the indie rock scene, The Vaccines, a four-piece hailing from London, debuted their very first album What Did You Expect From The Vaccines? on March 14th. A 33 minute long musical tapestry sure to land them on many prestigious top band lists of 2011. The Vaccines might be this year’s Phoenix, but they possess a less tightly wound style and it’s not hard to tell that their CD was recorded in only two weeks.

What Did You Expect From The Vaccines? Has a rough-around-the-edges punk quality, as if there was a large hole in the recording studio wall and a small fraction of the music drifted outside. Of course you can be sure this is not the case, sounds like this are largely intentional and wonderful.

Their punk influences show on “Wreckin’ Bar (Ra Ra Ra)” and “Norgaard” especially, both under two minutes long and bursting with Buzzcocks-worthy energy. The album is not a mixed-bag by any means but the laid-back monotony of good songs (“Post Break Up Sex”) almost work against them on later tracks. However, these are the simplistically genius musings of a band who created an album that The Killers wish they made.

Lead singer Justin Young is like a very sedated Brandon Flowers in session and apparently in person as well. In a late 2010 interview with BBC Newsbeat he stated “A friend actually started The Vaccines and then he quit, so it’s a happy accident the four of us are in a band together.” Yes, very fortunate indeed for the public that The Vaccines exist, a vast understatement, especially if you examine their placing on the UK charts or open your latest issue of Rolling Stone.

So what did I expect from The Vaccines? Little to nothing. What do I expect now? Great things from up-and-comers with good odds for fame and vintage garage rock glory.

One thought on “The Vaccines – What Did You Expect From The Vaccines? Album Review”