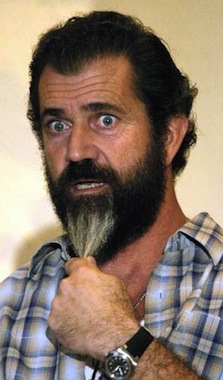 Mel Gibson, in what you’d think was a ploy to prove that he’s not anti-semitic, is making another movie that focuses on the struggles of the Jewish community.

Gibson is teaming up with the well-known screenwriter Joe Eszterhas to produce a film about Jewish warrior Judah Maccabee ,who attributed greatly to the defeat of the Greek/Syrian armies in second century B.C.

Turns out Mel’s been vying for this project for over ten years, and finally snagged it…

So, it’s not an attempt to repent, it’s just another horrible movie about people of different nationalities dying.

This project will most likely just be another Passion Of The Christ, where Mel portrayed Jewish people as sniveling, cowardly monsters that lacked the depth of highway potholes

What the fuck is wrong with him?…

I’m sick of people defending him and saying that he only said racist things because he was drunk. I get drunk and bruise my shins, he gets drunk and calls women “sugartits” and says things like,

“Fucking Jews…The Jews are responsible for all the wars in the world.” (The quote alone says a lot about the seriousness of his upcoming project)

Also he’s been recorded via telephone by ex-girlfriend Oksana Grigorieva, using every racial slur in the book, insulting every race except maybe Asians.

Boycott his movie. Mel Gibson doesn’t exist to me after 1996. He’s a phantom of the past, a ranting fool with the validity of a dead lab rat. (or “Beaver“)