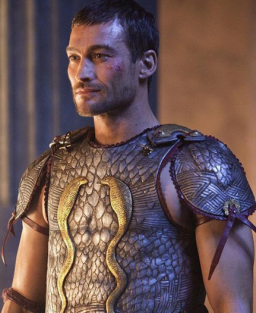 Andy Whitfield, 39, a fairly unknown actor before being cast on the hit Starz show Spartacus: Blood And Sand, passed away yesterday morning in Sydney, Australia.

The athletic Wales-native left the show for a hiatus after being diagnosed with non-Hodgkin Lymphoma, while the creators worked on a brief prequel to Blood And Sand called Spartacus: Gods Of The Arena, focusing on some of the core characters, sans Whitfield.

Whitfield would have come back for a second full season if he hadn’t received the terrible news in March of 2010 that his cancer had reappeared. Nobody but his family really knew the details of his health previously, so his death comes as a huge shock…

The Spartacus character was eventually recast in the form of Liam McIntyre, an Australian actor who has also done little work before the upcoming third season of Spartacus, set to air in 2012.

“Obviously, Andy Whitfield left an indelible mark on all of us in the Spartacus family. He was a gentle man who never said a bad word about anyone, a gifted photographer, engineer (no really!) and a brilliant actor. Andy’s incandescent film presence made men want to be him and women want to marry him. Andy’s two babies will always know that their Daddy cherished them and their mother, Vashti, above all things. How lucky we were to have him grace all our lives. Godspeed, Andy!”

Andy was one of the first action-based actors who I’ve really respected in a long time, maybe since Stallone or Schwarzenegger. Masculinity combined with sensitivity.

He was also one of the only people on TV that I could find no pompous judgements with during his millions of shirtless scenes. Rest in peace, talent. You were/are a badass, lost too soon.