Though they were once at the top of their game, Netflix has come under a lot of scrutiny lately.

They are being criticized for raising prices significantly, losing Starz content, splitting the company into two parts (Qwikster, the new subsidiary) and generally being douchebags.

At least he’s sort of getting what he deserves, in the form of massive backlash (25,000 comments on their blog) AND a stock plummet. (Check out the 5-day stock chart, bottom left)

The most douchebaggy thing I can think of? Apologizing for something that you blatantly don’t plan on changing.

He recently sent out a very fearful letter, apologizing for the price increase in August ($8.99 to $15.98 for streaming and DVD-by-mail) and explaining all the changes…

I messed up. I owe you an explanation.

It is clear from the feedback over the past two months that many members felt we lacked respect and humility in the way we announced the separation of DVD and streaming and the price changes. That was certainly not our intent, and I offer my sincere apology. Let me explain what we are doing…

For the past five years, my greatest fear at Netflix has been that we wouldn’t make the leap from success in DVDs to success in streaming. Most companies that are great at something – like AOL dialup or Borders bookstores – do not become great at new things people want (streaming for us). So we moved quickly into streaming, but I should have personally given you a full explanation of why we are splitting the services and thereby increasing prices. It wouldn’t have changed the price increase, but it would have been the right thing to do.

So here is what we are doing and why.

Many members love our DVD service, as I do, because nearly every movie ever made is published on DVD. DVD is a great option for those who want the huge and comprehensive selection of movies.

I also love our streaming service because it is integrated into my TV, and I can watch anytime I want. The benefits of our

streaming service are really quite different from the benefits of DVD by mail. We need to focus on rapid improvement as streaming technology and the market evolves, without maintaining compatibility with our DVD by mail service.

So we realized that streaming and DVD by mail are really becoming two different businesses, with very different cost structures, that need to be marketed differently, and we need to let each grow and operate independently.

It’s hard to write this after over 10 years of mailing DVDs with pride, but we think it is necessary: In a few weeks, we will rename our DVD by mail service to “Qwikster”. We chose the name Qwikster because it refers to quick delivery. We will keep the name “Netflix” for streaming.

Qwikster will be the same website and DVD service that everyone is used to. It is just a new name, and DVD members will go to qwikster.com to access their DVD queues and choose movies. One improvement we will make at launch is to add a video games upgrade option, similar to our upgrade option for Blu-ray, for those who want to rent Wii, PS3 and Xbox 360 games. Members have been asking for video games for many years, but now that DVD by mail has its own team, we are finally getting it done. Other improvements will follow. A negative of the renaming and separation is that the Qwikster.com and Netflix.com websites will not be integrated.

There are no pricing changes (we’re done with that!). If you subscribe to both services you will have two entries on your credit card statement, one for Qwikster and one for Netflix. The total will be the same as your current charges. We will let you know in a few weeks when the Qwikster.com website is up and ready.

For me the Netflix red envelope has always been a source of joy. The new envelope is still that lovely red, but now it will have a Qwikster logo. I know that logo will grow on me over time, but still, it is hard. I imagine it will be similar for many of you. 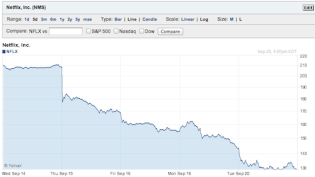 I want to acknowledge and thank you for sticking with us, and to apologize again to those members, both current and former, who felt we treated them thoughtlessly.

Both the Qwikster and Netflix teams will work hard to regain your trust. We know it will not be overnight. Actions speak louder than words. But words help people to understand actions.

p.s. I have a slightly longer explanation along with a video posted on our blog, where you can also post comments.

[I had No idea Jeff Bridges was so multi-talented, Crazy Heart AND Netflix? Geez]