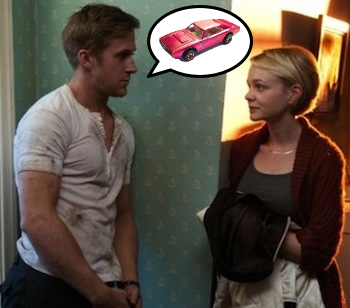 Drive is the latest misconstrued “action” film. It stars Ryan Gosling and Carey Mulligan, who should win awards for starring in the best movie with basically no emotions or dialogue. The storyline is well-described by the one-liner spoken by Gosling in the ad, after being asked what he does for a living: “I drive.” Though in some ways, this is really about so much more, and so much less (you’d know if you saw it).

It’s true, Gosling does play a driver, an unnamed character with absolutely no backstory. The most we figure about the guy is that he’s exceedingly excellent at his “job” – all things automobile, and that he showed up seeking employment at a mechanic’s shop “a few years back.” This information is revealed to us by Bryan Cranston (Breaking Bad) who is one

of only two characters that manage to show true human emotions. (The other is Carey Mulligan’s character’s son, played by Kaden Leos, and maybe her baby daddy too.)

If you want to rate this movie for its potential as a cult classic and/or “iconic” film, I’d actually place it somewhere between Pulp Fiction and Blue Velvet. Nowhere near the entertainment value of Pulp Fiction, though certainly better than Blue Velvet, and less weird at least than that. Drive is heavily stylized, driven (no pun intended) by melodic synthy faux 80’s music with a contrast of the usual moody cinema-orchestra instrumentals…

This movie is just very surprising, in many aspects. Surprising how uncomfortable it makes you, watching literal minutes of complete silence pass, while Irene (Mulligan) and anonymous pensive driver man (Gosling) stare at the ground, and sometimes at each other. 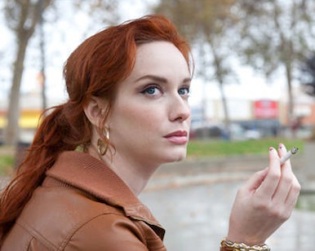 The violence may also be offputting for some, most of it occurs later in the film, with shotguns and massive paint-bucket blood splatters.

The casting is excellent, though some of which seems wasted. Like on Christina Hendricks, a lowlife and girlfriend of one of three major villains in the movie, two of which are played by Albert Brooks and Ron Perlman. Hendricks is in the movie for a very short while, and utters less than three pages of script lines though I admit she is memorable in the part, sort of like Blake Lively in The Town.

My summary of Drive is that it would be absolutely perfect for deaf people. Maybe it was director Nicolas Winding Refn’s intention that you can figure out what’s going on without any dialogue whatsoever. Man drives, meets woman, gets in trouble, finds himself in sticky situation, wears tight-fitting gold Scorpion jacket. That’s it.

The only non-shock here is that Gosling gets into trouble for his actions. That is, after all, what happens when you’re a stunt man for the movies, moonlighting as a wheelman for real-life crooks. (How did you think he paid for the flashy scorp jacket or the designer jeans?)

The song they play during the most climatic scene in the movie is downright bizarre, it’s a very gory and epic fight of sorts that features a musical number in the key of Barbara Streisand or something Streisand-esque.

As movie-goers we expect dialogue, not just music and vacant looks of despair. Maybe that’s a tragedy, maybe not.

I will say that Drive is worth watching, but it is not at all what you expect. It’s also unlikely that you would seek a second viewing, unless you’re really really craving that daily dose of weird.

The intro is the best part. (It’s nice to hear Lovefoxxx of CSS, getting her dues on the big screen.)

6 thoughts on “The Awkwardness Of ‘Drive,’ Starring Ryan Gosling”