The 37th season of SNL aired last night in its usual “too late for real adults to watch” 11:31 p.m. slot. The show featured Alec Baldwin, in his 16th time as host and Radiohead’s second as musical guest.

There’s something unsettling about this combination. The words “unhip” or “irrelevant” come to mind.

I’m aware that Baldwin has millions of fans because of 30 Rock, and that he is funny for his careless asshole charm. (Something that seeps into real life)

Radiohead also have multitudes of followers, still. I’m not quite sure why. The otherworldly-yelpings of Thom Yorke and his inactive cyclops-eye haven’t appealed to me since 1996’s “Talk Show Host…”

I don’t feel like this was the right choice for the opener or music guest, not one bit.

Last year’s Justin Timberlake/Lady Gaga closer episode would have felt more fitting, or at least something remotely similar. Get Whitney Cummings or Kat Dennings or Charlie Sheen to host for god’s sake! Even

Newer fans of SNL hardly care how many times Alec Baldwin or Steve Martin have hosted. All they want is their weekly dose of Digital Short “Dick In A Box” or “Laser Cat” humor, which by the way, isn’t always funny.

The premiere last night was okay, Steve Martin and Seth Rogen came out for the monologue – Baldwin’s usual hosting-number-bragging schtick, where he scoffs at Steve Martin, then insists it’s all in good fun. (Same thing happened last year)

Three segments stood out – Top Gun screen tests, a stalkerish daughter skit, and an elaborate soap-opera spoof featuring Vanessa Bayer as Susan Lucci, though she kind of looked like a wonky Marisa Tomei.

Honestly I don’t even know what I’m writing about…I don’t except anything from Saturday Night Live, I would ask to laugh more than twice during the show, and maybe for better hosting choices. (Bring back Megan Fox or Natalie Portman. And get Metric as the musical guest) 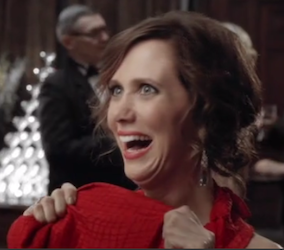 Otherwise, I’m done criticizing things that can’t be helped. It’s a good show for what it is – mediocre, for the past nine years.

Sadly, the amount of hilarious skits, the ones people seem to remember (Lonely Island, Stefon + Kristin Wiig bits) are vastly overshadowed by the amount of terribly awkward and unfunny ones.

[Next week should be better, Melissa McCarthy (Bridesmaids, Mike And Molly) is hosting next week]