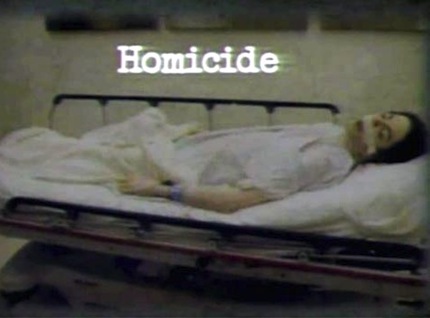 A morbid photo of the pop singer was shown in the courtroom yesterday morning. It depicts Jackson in a hospital gurney, post-mortem…

In the slide show used by the prosecution, the photo was touched-up to appear more grainy, with the word “homicide” emblazoned above his corpse.

To add to the shock value of the slideshow, a photo of Michael dancing at Staples Center to “Earth Song” was put alongside the lifeless photo. Attorney David Walgren stated: 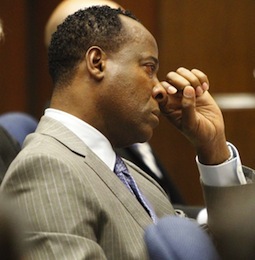 “What happened between that time and approximately 12 hours later when Michael Jackson is dead on June 25, 2009? What you
will learn through the evidence is that what happened during that time frame is that the acts and omissions of Michael Jackson’s personal doctor, Conrad Murray, directly led to his premature death.”

Walgren also played a tape of Jackson slurring his words in a nearly incomprehensible manner, and a recorded conversation with detectives involved in the case, several days after his death on June 25, 2009.

The cause of death was determined as acute Propofol intoxication, a medication that some refer to as “milk of amnesia,” and is used to hypnotically sedate patients. Propofol is also commonly used in veterinary medicine.

The defense’s case is that Michael Jackson killed himself. They state that his actions alone led to his untimely death at the age of 50. If convicted, Murray would lose  his license to practice medicine and would face up to four years in prison.

The sentence is not really that severe if you ask me. But I think the guy is just a scapegoat for the much bigger issue of Jackson’s general prescription drug addiction, which he may well have died of regardless of Murray existing

The “death” photo of Michael Jackson was posted on Tuesday on The Smoking Gun where people commented on the photo via Facebook. One Neal Eger made a very insensitive comment:

[Hey Neal, you hear that? It’s the douchebag siren, going off outside your house. Just wait till YOU die and a hoard of MJ fans dance like Thriller zombies on top of YOUR grave ]