I know I complain about almost everything and you all might be wondering at this point, what does this chick even like besides bad reality shows and Britney Spears? Well, a lot of things, but praise isn’t all that interesting.

I could praise Foster The People as the biggest indie band of 2011. I could tell that that I love their CD Torches and that my favorite tracks are “Don’t Stop (Color On The Walls)” and “Helena Beat” OR I could tell you that I’m becoming disenchanted with the band after seeing them on SNL…

My disenchantment for Foster The People, who began getting airplay much earlier this year and were nominated for a Best New Artist VMA, actually started over a month ago. They’re one of those bands that, like MGMT and Vampire Weekend, sound much different in concert. 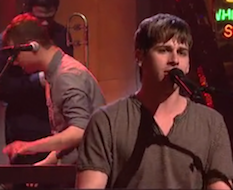 As is the opposite for acts The Kills and Arctic Monkeys, some of FTP’s “magic” evaporates as soon as they hit the stage. That magic in Mark Foster’s voice, the subtle laid-back yet high-pitched glow of “Pumped Up Kicks,” one of the most unexpected hits of summer – turns to crap onstage.

Okay, not “crap” persay, but it’s already a pretty tame song and when I saw them on Saturday Night Live a few days ago with their foot-tapping, piano-rocking, skinny-jean-wearing lo-fi festival of femininity I realized that this band is overhyped.

They have three or four good songs and they don’t deserve to be called the best. Turn to The Vaccines,  tUnE-yArDs or Smith Westerns instead. Foster The People have seen their five months of fame – and it’s time to pass the torch (no pun intended) to someone better. Someone exciting.

So, FOSTER THESE PEOPLE, send them to a slummy orphanage for forlorn hipsters. Their singer looks like Cary Elwes in The Princess Bride…if he’d had his balls ripped out by Andre The Giant.

4 thoughts on “Foster These People…”