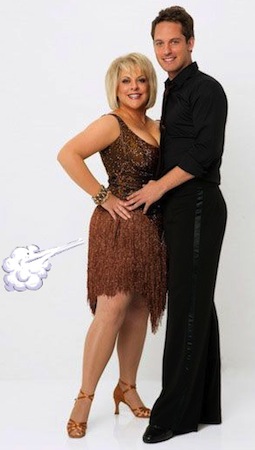 After she (most likely) passed extreme gas on Monday’s Dancing With The Stars episode last week, Nancy Grace has denied the windy allegations, blaming her Irish partner, Tristan MacManus.

She joked on Thursday to reporters by saying, “If you listen really closely to that clip, it has an Irish accent.” Oh yes, that old trick. Blame it on someone else, someone less famous and less annoying.

We all know it was you Nancy. We know you eat nothing but hamburger meat and chicken cutlets sauteed in garlic and that it makes you toot like Thomas The Train.

Now nobody can take you seriously as a reporter! Oh wait, nobody ever did.

“I can’t believe he is getting away with this!! Oh my godddd, where’s the bourbon?”

[A fart fetish site called Clips4sale is trying the purchase the tape from ABC to appease their ‘flatulophiliacs’ fanbase, no joke]