According to his iPod selection (it was dissected in his new biography, by Walter Isaacson) and several quotes, Steve Jobs was not that interested in today’s musical stylings. He much preferred 60’s and 70’s music.

Bob Dylan was by far his favorite musician (his iPod contained 21 Dylan albums) who he also looked up to, someone he may have learned “constant innovation” from.

So if innovation is what kept Apple alive through the years, can we attribute the company’s success to Bob Dylan? No, not completely. But it’s still intriguing.

The book, simply titled Steve Jobs, has a quote pertaining to Jobs’s distaste for certain new music, “I respect Eminem as an artist, but I just don’t want to listen to his music, and I can’t relate to his values the way I can to Dylan’s.”

Though we all know Steve was not close-minded, statements like that display the type of standards he upheld. Can you imagine what your music collection would by minimized to if you deleted all the artists with questionable values?

No more Gaga, Spears, or Kanye. Your pop, rap and metal collection would be split in two like a fairy-invested tree in Fern Gully. Other artists found on the innovators iPod?… 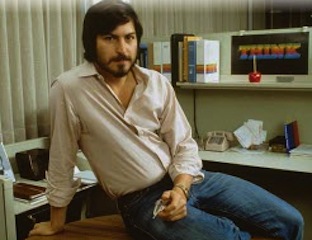 Isaacson says that as far as contemporary music went, the iPod “autopsy” showed that new music made up only around 25% of it. That includes Alicia Keys, The Black Eyed Peas, U2, Seal, Moby, Dido, Coldplay, Green Day, and John Mayer.

So, even though Apple used music from bands like Sum 41, The Offspring, Avril Lavigne, Sir Mix-A-Lot and Wolfmother to promote their products, it is unlikely that they lived up to Jobs’s moral standards or found a home on his iPod.