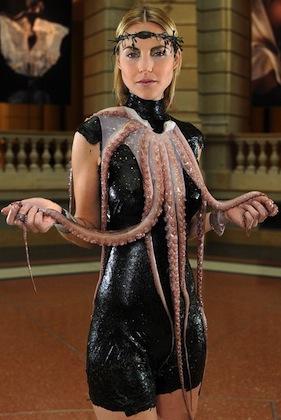 I wasn’t a fan of Lady Gaga’s meat dress and I’m not a fan of this octo-weed smock either, it’s almost as if this lady wants people to think she washes her crotch with runoff water from Pike Place Market.

Yes, it’s true, this is an actual outfit, technically. It’s attention-seeking and impractical but was featured in a new exhibit in Berlin, created by a chef named Roland Trettl.

Wait, a chef made this? So it’s MEANT to be eaten. I wonder if they’ll eat the model too? I hear bones are useful in cooking because they highlight flavor and add texture. Mmmmmm.

I dunno about you, but I wouldn’t wear OR eat this crap. It’s good for pointing and laughing, though.

One thought on “Octopus And Seaweed Gown, Fashion Or Garbage?”