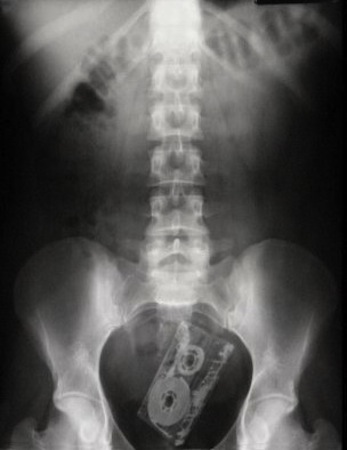 Everything from a Buzz Lightyear doll to coins, cassette tapes, baby shoes, chopsticks, ipods and an electrical cord. The insertion happened mostly rectally or orally though a few did occur through the nose and urethra.

Stuck Up!: 100 Objects Inserted And Ingested In Places They Shouldn’t Be even has a purpose. According to Sindhian, Dreben and Knight the book looks to remove the embarrassment element and encourages people to seek treatment after inserting or swallowing strange things.

Dr. Sindhian says that many adults swallow their wedding or engagement rings to hide them from potential mates, when cheating on their spouses. Also, that cassette tape was found fairly recently, not in 1994, like you’d think. Maybe it was a symbolic rejection of modern technology? That’s deep….[insert rectum joke here]

Anyway, Stuck Up! the best/most inappropriate unintentional coffee book, also reveals the supposed “reasons” for these odd insertions or ingestions (“I was drunk” was apparently a common excuse.)

Many patients claims that they “tripped” or “fell” and accidentally “landed on the object” while some straight up admitted that it was for sexual pleasure. However, some instances, like the Barbie doll, were just children being children. Eating objects for no particular reason except to “see what would happen…”

26 thoughts on “X-Ray Photos From The Book ‘Stuck Up’”