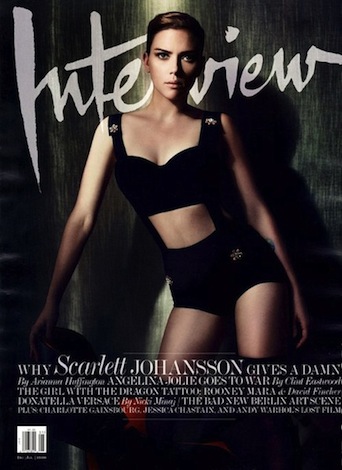 Scarlett Johansson sat down with Arianna Huffington in the latest issue of Interview Magazine  where she took purposefully scandalous photos for public viewing and talked about privacy, Obama and being confused about Occupy Wall Street.

She thinks social media tools are “unprecedented” and “amazing” but reveals that there’s nothing she’d rather do less “than have to continuously share details of my everyday life.” Also, she’d rather go to the White House Correspondents’ dinner than any awards show.

I’ve got to agree with Evil Beet on this one, I’m on the fence constantly about Scarlett Johansson, and she can’t seem to make up her mind either, about anything.

She campaigned desperately for Obama yet was disappointed with the state of things in Ohia, while shooting The Avengers. She both loves and hates Twitter/Facebook, for other people, and is the same way about the Occupy movement. She is so uncertain and afraid to stand up for (or against) any particular thing, almost like an actual politician! Maybe she should run for office.

Her statement “this has just been a bit of a crazy year” seems like the most true yet vague, thing here. And I do agree with her about Occupy, “I’m not exactly sure what the message is behind it all. It is sort of unclear. I mean, yes, people are fed up – and I think quite rightfully so. But what are they proposing as an alternative to just being upset or feeling disillusioned or abandoned?”

When speaking of her newest/smarmiest movie We Bought A Zoo, she makes it seem like a revelation that Cameron Crowe is a good director and makes it about her, “Well, firstly, I’ve always wanted to work with Cameron Crowe. I’ve auditioned for him several times for various projects over the last ten years, and I’ve always admired the way he worked with me.”

2 thoughts on “Scarlett Johansson For Interview Magazine, Indecisive Woman Of The Year”