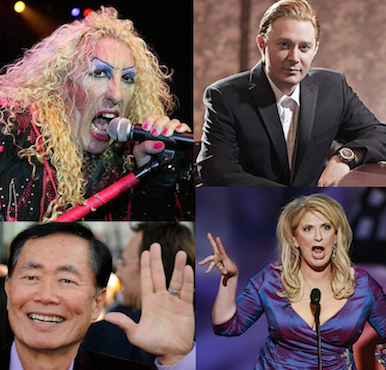 Rhymes aside, the Celebrity Apprentice cast of 2012 is mostly made up of stars. I’ll list them from the most to least famous.

You are probably familiar with some of the rest, Aubrey O’Day was in Danity Kane, Cheryl Tiegs is a former supermodel, Penn Jillette an “illusionist” and comedian/one half of Penn and Teller. (If I could choose to anonymously stab one person on this list it would have to be him)

The last, Dayana Mendoza, was Miss Universe in 2008. A poll on AJC revealed that she received the least votes from people asked who they are most looking forward to on the show. (Clay Aiken won, with 495 votes)

One thought on “Celebrity Apprentice 2012 Cast, Aiken To Takei Your Lampanelli”