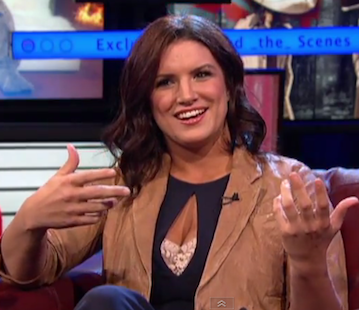 If I have to see the ad for Haywire one more time I’m going to…do nothing at all. But I’m going to wish I that I was a short-bus superhero whose power was to go temporarily blind and deaf.

Really, Steven Soderbergh? Another movie about a betrayed spy, but it’s different because there’s a woman knocking people over like a rainforest in Peru instead of Matt Damon, Daniel Craig or Jason Statham?

It’s also clear that they couldn’t find anyone famous to play the lead in the movie, either that or they ran out of money after casting every random famous male actor ever, like Michael Fassbender, Ewan McGregor, Michael Douglas, Channing Tatum, Antonia Banderas and Bill Paxton.

I was already frustrated with this crappy reoccurring trend of bland action movies with the same recycled plot (the only exception lately, was Salt) but then Gina Carano had to stop by my favorite nerd show, and ruin that as well. As if the theater wasn’t enough, she’d infiltrated TV now too. Hm maybe she is a more clever spy than I thought.

Her passive aggressive “I’m too good for this” attitude on Attack Of The Show nearly sent me off the deep end. Poor Candace Bailey, she tried her best, but you just can’t crack a genuine smile when it’s on the face of a genuine bitch.

One thought on “That Lady From ‘Haywire’ Seems Like A Bitch”