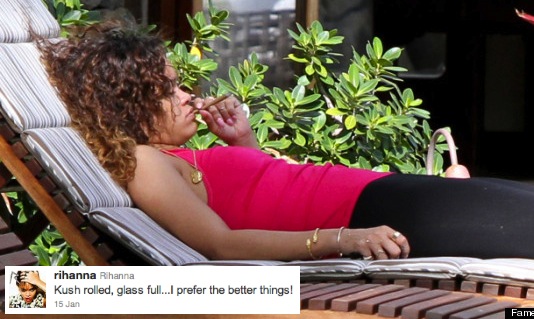 Barbado-not-so-clowntastic-anymore Rihanna was photographed Monday and Tuesday casually puffing on what was almost surely a blunt.

I use “casually” loosely because it actually looks like she fell asleep smoking it though I guess she was just resting her eyes and dreaming of scrawny blonde men with bad tempers.

One website went on and on about how bad it is to smoke when you’re a singer, “smoking has and will always affect the intonation, stamina and vocal coordination of any act.”   Ohhh boo it’s Rihanna, leave her alone. Let her smoke her thin, poorly-rolled blunt in peace.

I’d be more concerned about the fact the she just finished working out and then lit the thing up on though I guess if you’re going to ruin your lungs it is best to do it AFTER utilizing them.

In other man-down-rum-pum-pum-love-in-a-hopeless-umbrella news, more of her Emporio Armani underwear campaign pictures came out.

Interesting how awake she looks on an actual bed, compared to that Hawaiian lawn chair.

One thought on “Rihanna Smoking In Hawaii, Plus More Armani Pics”