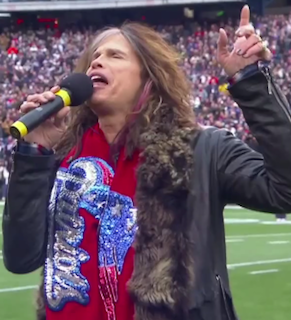 Before the Ravens-Patriots AFC championship matchup on CBS Steven Tyler wandered out his cage to “sing” the national anthem. As is true with most national anthem attempts, it was pretty sketchy.

The worst part? “The rockets red glare” bit. His bedazzled Old Navy-lookin’ Patriots shirt didn’t help much. I gotta say, Kristin Chenoweth blew Tyler out of the water with her opera-style rendition of the song pre-Giants-49ers game.

The real reason she did better on Sunday? She was willing to laugh at herself. Oh and she hasn’t sold her soul to the devil (American Idol) yet. A guest spot on Glee doesn’t count.

In the words of Randy Jackson, “That was pitchy, dog.”