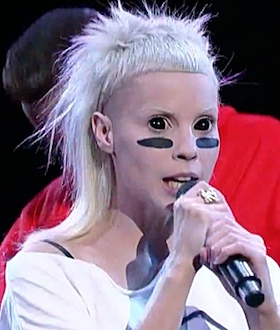 The Die Antwoord (translation: “the answer”) music video for “I Fink U Freeky” dropped January 31. It is the song most recognizably tied to the South African trio’s second album, Ten$Ion. The band was also featured in a spread within the latest Rolling Stone plus appeared on Letterman day before yesterday.

They are the most eccentric and eerie band that I’ve ever seen on mainstream television. Their co-singer is a little girl called Yo-Landi Vi$$e (who’s actually 35) with a high-pitched voice, black contacts and contrasting white-blonde Robynesque hair.

Add band members Ninja masked DJ, Hi-Tek to the equation and you’ve got a spine-tingling and eye-opening experience. Their music can’t be compared to anything, nor can their appearances. The closest I can come up with is Slipknot meets Lykke Li and Ali G.

David Letterman was brave to shake their freeky hands.