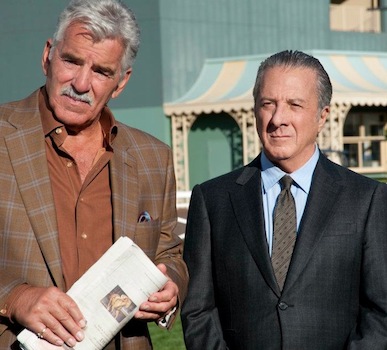 You may have heard that the HBO drama Luck, starring Dustin Hoffman, Nick Nolte, Joan Allen and Michael Gambon (Dumbledore) has halted production after the real-life deaths of no less than three horses that were involved with the race and stable scenes.

“It is with heartbreak that executive producers David Milch and Michael Mann together with HBO have decided to cease all future production on the series ‘Luck,'” the network said in a statement.

For fans, there is hope. Mann and Milch expressed interest in furthering the show, “The two of us loved this series, loved the cast, crew and writers. This has been a tremendous collaboration and one that we plan to continue in the future.”

Though people involved insist that safety protocol was followed above and beyond standards, there may be several reasons for the horse fatalities in Santa Anita.

Two of them (Outlaw Yodeler and Marc’s Shadow) were euthanized after leg injuries during the first season and recently another reared, fell and suffered a fatal head injury.

It is possible that all three deaths were bouts of terrible “luck,” but the fact that the horses are/were all retired d-list race horses seems like a major contributing factor and red flag.

Marc’s Shadow was eight years-old, quite arthritic and had not raced professionally for four years. According to reports, Outlaw Yodeler was a five-old thoroughbred who was on several painkillers, muscle relaxers and anti-infammatory drugs.

There is not much information on the horse that died yesterday but the other two were raced twice in a single day which is beyond questionable for older animals with joint problems.

I don’t usually agree with PETA’s extremist ways (they suggested from the start that stock racing footage be used instead of live animals) and understand the need for authenticity, but the decision to halt production was the right one.

Those that continuously say things like “accidents happen” and bring up the fact that American Humane Association Certified Safety Representatives and veterinarians were close by are kidding themselves.

You can inspect a decrepit old man and clear him to walk around, but forcing him to run down the hallway repeatedly is ultimately going to end in sorrow.