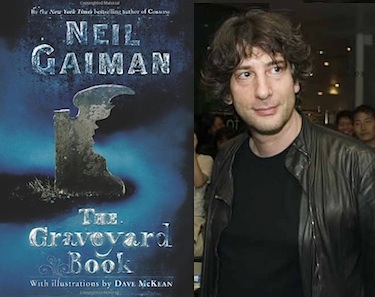 Neil Gaiman, is an author whose work has been translated to the screen many times. From Coraline and Stardust to the BBC TV mini-series Neverwhere and the yet-to-be seen American Gods, which has been picked up by HBO and Tom Hank’s production company.

The Graveyard Book is another upcoming project. Rights have been bought by Disney for six figures and Henry Selick (Coraline, Nightmare Before Christmas) is attached as director. Gaiman’s young adult work of fiction came out in 2008 and won multiple awards including the Newbery Medal and the Hugo Award for Best Novel.

It is loosely related to The Jungle Book in that the young boy it centers around is an orphan raised by ghosts instead of animals.

It’s a lot better than it sounds. One of my favorites by Gaiman and an easy read, I recommend you check it out before the movie comes out so you can criticize it properly with the rest of the snobs.