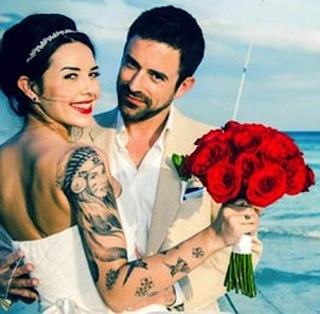 Pretty Wild star and member of the infamous Hollywood Hills burglars, Alexis Neiers, is disregarding the rule of not dating within AA.

She is newly wed, and met her Canadian husband in a group for addicts.

“We met in Alcoholics Anonymous, he’s six years sober,” she told E! News. “When I first came into the room, I was such a mess and I remember him staring at me from across the way. He kept his distance.”

After attending therapy for several months and returning to meetings, her future boytoy Evan Haines noticed the difference. “I came back and he saw the consciousness shift that I had developed. He asked me out for a month before I finally said yes.”

“Our first date, we went to dinner and then sat on the beach for hours talking about life, our goals and dreams and I remember staring at him in awe, thinking, ‘Does he really exist?’ We both love service work.”

The two married in Mexico at the Blue Parrot Hotel in front of 20 people, including her two sisters and mother.

When I gaze deep into my crystal methrock I see that this relationship might last. I also see Alexis and Tess Taylor returning to television.

Everyone cross their heroin-injected fingers, praise the lords of The Secret and repeat after me – “And so it is.”

3 thoughts on “Alexis Neiers Met Her Husband In AA”