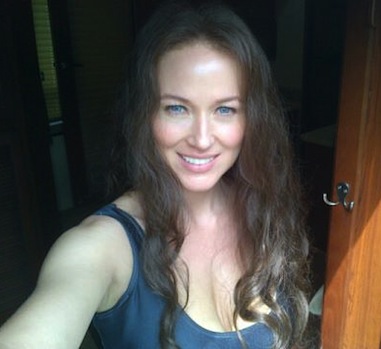 So, I’ve bombarded you with pictures of Andre 3000 as Jimmy Hendrix, Lindsay Lohan as Liz Taylor. Maybe it’s too much, but here’s something to chase the bitter image of Lindsay’s sad attempt to not be a freckled skeleton wrapped in leather right out of your head…

Last week, Foo Fighters drummer Taylor Hawkins was cast as Iggy Pop in the CBGB. I happen to think Jewel as June is better casting even though they don’t look that much alike. Reese Witherspoon didn’t either and still did a great job.

This is on Lifetime, just like Liz & Dick, so I probably won’t be watching. But this photo of a brunette Jewel from her Twitter is still refreshing.

She wrote, “Here I am as June in my trailer with her blue eyes and perfect teeth #ringoffire.”