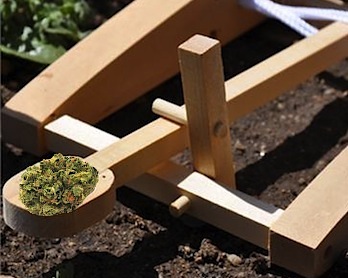 So I’m reading the “cocaine” issue of New York Times Magazine that was appropriately handed to me by my mom, not because I have a snorting addiction but because she hands all the issues down to me, and I notice something about a “marijuana catapult.”

Naturally I’m very intrigued, even as someone who doesn’t smoke pot anymore, it sounds like the most fascinating thing ever. Sadly blueprints and a point-by-point description were not included.

What we do get is an explanation that moving marijuana is hard for drug cartels because it smells and is bulkier than coke, but worth it. Due to the stench and weight it “tends to cross the border far from official points of entry.”

“Michael Braun, the former chief of operations for the D.E.A., told me a story about the construction of a high-tech fence along a stretch of border in Arizona.”

“‘They erect this fence,” he said, “only to go out there a few days later and discover that these guys have a catapult, and they’re flinging hundred-pound bales of marijuana over to the other side.'”

“He paused and looked at me for a second. ‘A catapult,’ he repeated. ‘We’ve got the best fence money can buy, and they counter us with a 2,500-year-old technology.'”

Braun also mentions that the cartel makes bridges out of sandbags so they can cross the Colorado River using “buggies loaded with weed” that bounce over the Imperial Sand Dunes into Cali.

Bouncing weedbuggies and MARIJUANA CATAPULTS? I’m cataclysmically satisfied with my life now. I never need to use the internet again.

I can just watch SVU reruns or sleep for eternity now that I know things like this exist.