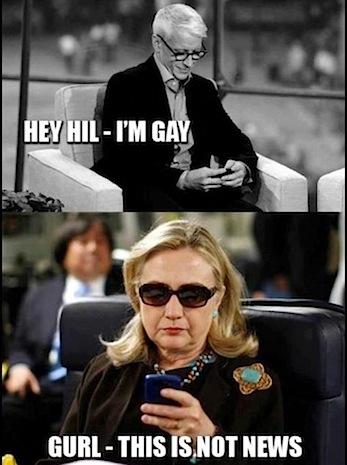 Anderson Cooper confirmed what we all suspected and loved about him: he’s gay. The Emmy-winning CNN anchor allowed his friend of over 20 years, The Daily Beast editor Andrew Sullivan, to post an email explaining his reasons for not coming out sooner.

So, Cooper is “coming out” mostly because he just never got around to it before. He talks about never being ashamed but wanting to maintain privacy and safety in war zones.

Here’s the part of the letter (go read all of it) the media has chosen to focus on:

“The fact is, I’m gay, always have been, always will be, and I couldn’t be any more happy, comfortable with myself, and proud.”

And here are a few of the sentences leading up to that statement:

“I’ve also been reminded recently that while as a society we are moving toward greater inclusion and equality for all people, the tide of history only advances when people make themselves fully visible.

There continue to be far too many incidences of bullying of young people, as well as discrimination and violence against people of all ages, based on their sexual orientation, and I believe there is value in making clear where I stand.”

You had me at handsome pensive intelligent gray-haired friend of Kathy Griffin isn’t straight.