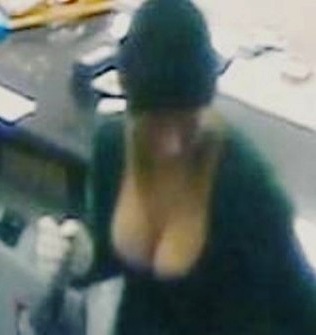 An unidentified blonde woman in her 20’s messed up a robbery on Monday when she entered a Queensland Gold Coast service station and failed to cover her face. She also wore a single glove, like Michael Jackson with boobs! Eee heee.

The most noticeable thing about the security footage was her chest so maybe the ‘Buxom Bandit” as she’s being called, is in the clear after all.

But why bring a knife when you’ve got pre-baby Jessica Simpson artillery to use as a distraction?

Her male accomplice was outside filling up on gas as she ‘terrorized’ the clerk with threats and made off with under $200 dollars from the cash register.

“We do have a lot of revealing outfits here on the Gold coast, but I have never seen a thief dressed like that.” –Awesome Aussie News Lady