Michael Fassbender has played a metal-grasping superhero in X-Men: First Class, a despicable sex addict in Shame, and a devious android in Prometheus. His next big role is perhaps more daring than any of those…

He has been cast as Desmond Miles/Altaïr in a big screen version of Assassin’s Creed. It’s nerve-wracking because movies based on video games are commonly unsuccessful (Doom, Super Mario Bros., Alone In The Dark).

Thankfully, Assassin’s Creed, originally voiced by actor Nolan North who also brought Uncharted’s Nathan Drake to life, has a meatier story than say, Prince Of Persia: The Sands Of Time. 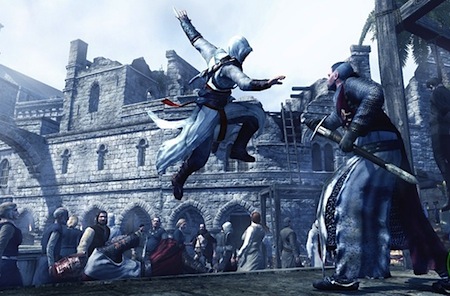 Taking Fassbender’s past filmography into account, he seems very unlikely to accept a part in a mediocre or crap effort. Afterall, stabbing Middle-Eastern dictators and clergymen is no laughing matter.

And who knows, maybe Kristen Bell will reprise her part as animus maven Lucy Stillman.