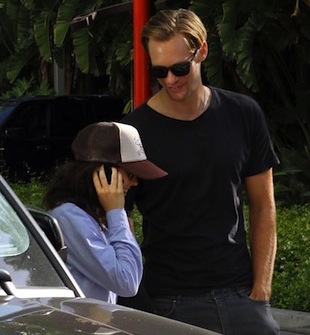 No celebrity is safe from death threats, not even the 5’1″ Nova Scotian famous for playing a pregnant teenager in Diablo Cody’s Juno. According to a warrant obtained by TMZ, Ellen Page has received multiple death threats.

The warrant allowed the LAPD to look at several Twitter accounts associated with messages from June. One read, “I’m going to murder Ellen Page. She’s dead.” Another, which indicates that the stalker is a woman, said:

“Ellen Page if you continue to date Alexander I will K-1-L-L you in public in the next year … Be it in a club, at a game, in a restaurant, or when you’re signing autographs.”

See, the fault lies with her Swedish 6’4″ boyfriend, Alexander Skarsgard. You cannot be a ripped and beloved True Blood vampire without insane female fans.

One of those fans wants Canada’s sweetheart and America’s indie darling dead, do something!

Watch Super, if you haven’t already, oh, and somebody clone Michael Cera ten times and make the duplicates guard her with riot shields.