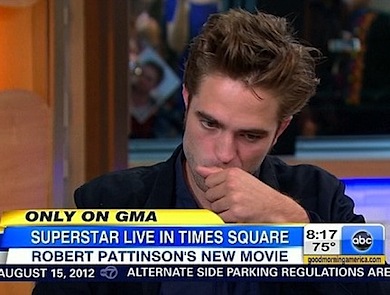 “I’ve never been interested in selling my personal life, the only reason I go on TV is to promote movies”

That’s RPatz’s way of telling GMA to suck it.

While Rob was clean cut and cute during his ice cream date with Jon Stewart, the Cosmopolis star went back to being his mellow greasy-haired vampire-self on Good Morning America.

Stephanopoulos: Your performance in Cosmopolis is just gripping, and I wanna get to it … but I got to get the elephant out of the room out of the way, uh, everybody wants to know how are you doing? What do you want your fans to know what’s going on in your personal life?

Rpatz: They seem pretty excited about whatever, you can kinda be like, uh ah, uh ahh, I like my fans to know that Cinnamon toast only has 32 calories.

Here’s Stephanopoulos’ first mistake, he acknowledges that he doesn’t care about the movie and really just wants to be the one to break some good quotes on how Rob’s holding up with Rupert Sanders directing his old-man wiener into Rob’s ex-girlfriend Kristen Stewart.