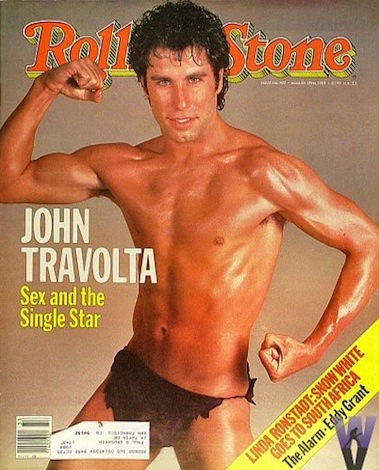 Call me crazy, optimistic, and behind the times. But I’m still not sure if that whole John Travolta masseuse story is true. So when I say “not guilty” I don’t mean that being gay is something he should be ashamed of.

However, [allegedly] whipping out his two-faced twig and berries to multiple strangers and yelling about “homosexual Jewish men” would definitely be something to be ashamed of.

Last week in an interview with Spinning Platters Rashida Jones started talking about her love of Frank Ocean, who recently revealed his sexuality. Eventually the conversation led to her mentioning that John Travolta should also come out.

“A movie star. Like John Travolta? Come out! Come on. How many masseurs have to come forward? Let’s do this…Big stars need to come out. Ricky Martin was huge. That was big; I was really happy about that.”

On Tuesday she Tweeted an apology for her words “Made a thoughtless comment about John Travolta,” she said. “I sincerely apologize. Nobody’s personal life is my business.”

I’m still silently yelling, ‘but he doesn’t have to come out cause he didn’t do that stuff!’ Where’s the proof? Are we supposed to take it from the mouths of disgruntled low-paid massage therapists?

I refuse to believe that all men who dance and sing that well are gay (I’m still waiting for circa not 2012 John to marry me).