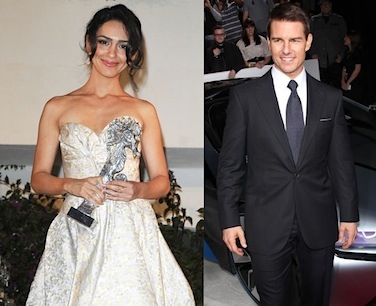 A source has revealed to Vanity Fair that Nazanin Boniadi, an actress who had a small part in Iron Man and a more significant one in How I Met Your Mother, was part of an elaborate search held by the Church of Scientology to find Tom Cruise a wife.

Boniadi dated Cruise from 2004 to early 2005, before he was linked to Katie Holmes, and after Penélope Cruz.

The article explains that she was forced to sign a confidentiality agreement, change her appearance, and share intimate details of her personal life with church leader David Miscavige and his wife Shelly.

After they broke up, Boniadi was forced by Scientology officials to scrub toilets and dig ditches (hopefully not her own grave).